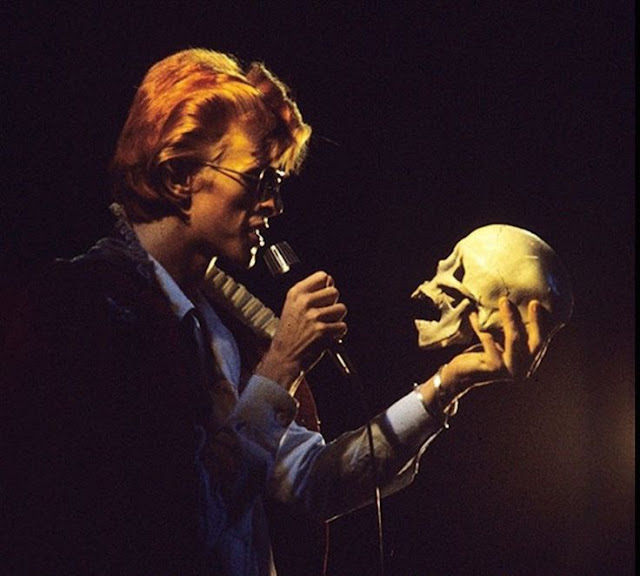 News guy wept and told us…


The spectacle is not a collection of images; it is a social relation between people that is mediated by images. - Guy Debord, Society of the Spectacle

And so it’s the next day.

Yesterday I cried. It’s personal. It was for all of us; as my friend Joe described us, the Bowie Casualties. If you don’t get that you probably won’t need to read on.

I was struck by how, of all the eulogies which sprung up both on social media and the mainstream press, it was in the comments columns underneath, (usually the domain of trolls and smart asses with axes to grind) that the most heartfelt sentiments were expressed. Almost without dissent the claims that Bowie was writing specifically for them, that he somehow had access to his fans’ personal dreams, nightmares, and possibly secret teenage diaries were ubiquitous. Of course they were all wrong. He was writing, creating, performing exclusively for me.

So you’ll forgive me if I take his death personally.

I switched on the Today programme on Radio 4 which I used to do regularly every morning but have recently fallen out of the habit of doing.

I stopped dead in my tracks. I really couldn’t move.

Yet all through that sad day I wasn’t interested in the BBC news or Channel 4’s coverage telling me about Life on Mars, the middle class answer to ‘what’s your favourite Bowie song?’ (with others with a passing interest in Bowie you might get “Heroes” if they’re of the stadium rock flag waving bent but they’ll never put the quotation marks round the word in their heads), and even Radio’s 1 and 6 creating a while you wait Cult Legacy Bowie theme park left me somehow cold. I certainly couldn’t care less about David bloody Cameron’s attempt to co-opt Bowie into a Tory spin buzz-quote. “He always did it right” and Jeremy Corbyn severely blotted his copy book in my eyes with his anodyne and mumbling “I’ll always think of Life on Mars” Hmmm. really Jezza? And every time I see the Eiffel Tower it always reminds me of Paris.

It’s important I think to start with the music.

That Bowie earned his place in the Pantheon of Rock gods is indisputable but his place at the table is hard to define. The history of Rock and Roll would certainly have gone on without him. The Beatles was inevitable, the Rolling Stones was inevitable, Led Zeppelin was inevitable. There was nothing inevitable about David Bowie. He created worlds inside and outside of Rock that would never have existed without his eclectic, magpie dilettantism. As his 1978 press campaign at the height of punk explained –

In Rock n Roll Suicide the final track of the Ziggy album, Bowie depicts his avatar unable to maintain his artistic and indeed physical reality, destroyed by very absurdity of the concept of himself as a Von Dannikanesque revolutionary rock star, but the suggestion is also of resurrection.

Bowie in the 1970s of course lived out his own mythos, nearly destroying himself in a narcotic haze of occult dabbling and neo fascistic messianic fantasy. But, incredibly he survived. Choosing to only almost burn out and then to move on, to come back, reinventing himself again and again. Yet I tire of references to Bowie as the ‘chameleon of rock’ there was never a chameleon so noticeable and self-promoting. This was a colour changing lizard whose raison d’etre was to draw attention to his moves.
As Phil Sandifer says on his blog about  Ziggy Stardust –

'Bowie …turns the fetishized spectacle of death into a mad celebration, this comeback is not his final move but his first. Of course death is no particular obstacle or stress for Ziggy. How could it be? Built out of the wasted salvage of death to begin with, Ziggy can make himself out of his own death as easily as anyone else's. Consume and burn out a rock star and another will take its place. The role survives its actor, and exists independently from him.'

But as I said this is personal. There’s a Bowie shaped hole in my life from yesterday. The idea of him not being around, lurking around the edges; poised and planning to unleash another bonkers drum n bass jazz odyssey or performance dance piece about some obscure new obsession seems incomprehensible. The world seems somehow diminished.

Bowie’s lasting artistic legacy will be not only his own work but also the influence he had on others. He influenced my every move as a teenager and well into my twenties and thirties. He was responsible for me forming bands, experimenting with music and noise and electronica, discovering the power of image, becoming an actor and creating a theatre company. I saw him live four times, on the Ziggy, Aladdin Sane, Thin White Duke and Serious Moonlight tours. I just wish I could have thanked him personally for everything he gave me.

So let’s get down to cases

It’s 1978. I’m getting married and living in Edinburgh. In the wedding photos Sarah is wearing a satin jump suit and I’m desperately trying to look like Bowie but probably end up looking more like Bamber Gascoigne. It's 1999 I'm appearing in Selfridges window in Oxford St London as Andy Warhol. Living art as promotion for my play Andy and Edie. As I walk from the tube station I find myself singing The London Boys "Bright lights, Soho, Wardour Street, You hope you make friends with the guys that you meet." and contemplating Warhol's advice, via Bowie about constantly re-creating yourself.


It’s 1976. Thanks to my friend Pamela recently re-inventing herself, Bowie style, with Mondrian inspired face paint and gravity defying spiky beehive as Punk scene queen Jordan  I’m on Malcolm Maclaren’s guest list for the Sex Pistols gig at the 100 club. I pose around in a black plastic T shirt made for me by a girlfriend. My hair is an approximation of Thomas Jerome Newton in The Man Who Fell to Earth. A few days later NME write about me. A short paragraph between descriptions of the Clash and Souxsie and the Banshees’ first gig (Sid Vicious on drums). According to them I am ‘A Bowie lookalike. As doppelgangers go he gangs more doppel than most’. This remains one of the highlights of my life. 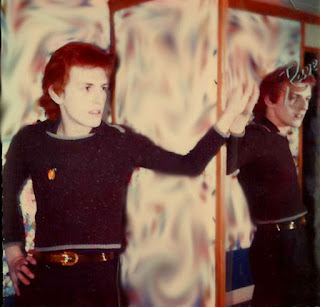 It’s 1986 I’m performing on stage at the Zap club with my group The Last Decade (an offshoot of EJK454F my Bowie and Eno inspired avant- rock bedroom band). I am channelling Ziggy Stardust while fronting a rapidly disintegrating experimental electro noise concept and friendship with my guitarist (A whole other story. There was a woman). 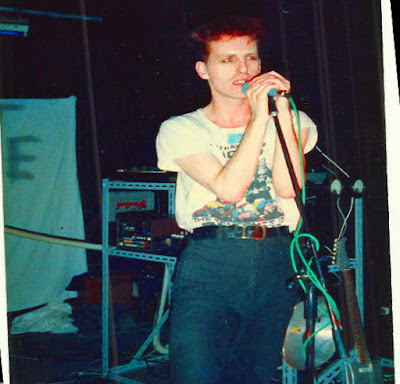 It’s 1972 I have experienced the epiphany that is Ziggy Stardust on Top of the Pops and asked a hairdresser neighbour, the mother of my girl-next-door schoolboy crush, to savagely crop my long corkscrew curls into a kind of Peter Pantomime pixie cut which I then proceeded to, gradually, incrementally in my Nan’s bathroom using Loreal hair die from Boots, die bright pillar box red.


It’s 1973. I am seeing Bowie for the first time live on stage at the Brighton Dome. I spend the whole gig fixating Bowie with an unwavering stare from row three (I queued five hours for tickets). I wish that when he gets to the line ‘perhaps the strange ones in the Dome…’ from Drive in Saturday he will gesture around the auditorium. He doesn’t. I conclude that ‘I could do better than that’ and that ‘I could make it all worthwhile as a rock n roll star’.

It’s 2000. I am playing Prospero on top of a thirty foot scissor lift on the deck of an oil dredging platform which my theatre company – Fireraisers have had towed onto Brighton beach for our free Millennial show This Rough Magic. An adaptation of The Tempest with stunt helicopter skydivers and a specially composed drum n bass soundtrack. There are 40,000 people watching from the beach and the promenade. My arms are outstretched. I am thinking ‘this is my Bowie at Hammersmith Odeon moment’ 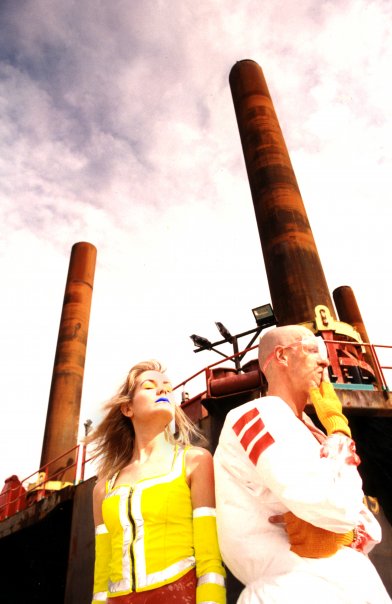 It is 1980. I am walking through the lanes with some friends and find myself singing “the little green wheels are following me” from Ashes to Ashes. “Only Bowie could get away with that lyric” I say.

It is 1974. I am dancing with myself to Jean Genie on an empty dance floor in a hotel nightclub that my mate Steve DJs at. I’m in full Bowie drag. Mime moves and everything. I have beer thrown over me at the bar and later will be beaten up in the street on the way home. The lumpen proles have seen the future and they don’t like the cut of its jib. For myself I have seen A Clockwork Orange and so fully understand their pain as well as the barely hidden animosity of the policemen who, later, help me, barely older or distinguishable from the thugs who attacked me.

It’s 1975 I discover that, while not homosexual, I can find sanctuary in the burgeoning Gay club scene. Ironically I meet and initiate relationships with some beautiful girlfriends there. fag hags and fruit flies all. Soon my outrageous style becomes too much even for the old queens hanging on to a lifestyle whose coded moves are under threat from legitimisation and I escape into the arms of Punk Rock. 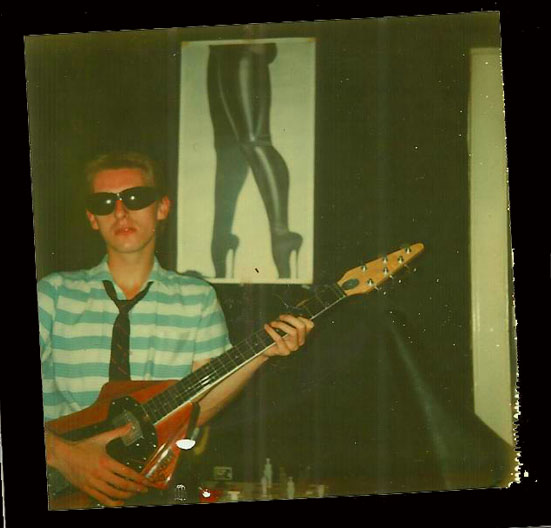 It’s 1982. There are ‘Bowie nights’ springing up in nightclubs across the UK. Finally social interaction and style have caught up with us. Me and Bowie. He then releases a slew of mediocre commercial albums and I lose some enthusiasm for the thin white one but he’s always there on the periphery.

It’s 1971. I’m on my way home on the night bus. A pretty teenage girl in hot pant dungarees and platform boots who I vaguely know and casually fancy spots my new haircut and sits next to me saying
“Anton, you’re looking more and more like David Bowie every time I see you”
An idea forms in my mind. I can use this. I will find love and adulation for my creative genius through Bowie. But I will do it by becoming myself.

It’s 1990. I become a performance artist. Untrained and somewhat slightly dazed. Basing most of my strategies and ‘alienated other’ performance persona on Bowie in The Man Who Fell to Earth.

It’s 2016. I have written a children’s novel. Had two disastrous relationships in the space of the last three years have survived another Christmas and New Year. I am 60 years old and

I stopped dead in my tracks. I really couldn’t move.
Posted by Unknown at 16:03